Dapo Abiodun (born 29 May 1960) is a Nigerian businessman and politician, who is the Governor of Ogun State after winning the 2019 general elections under the platform of the All Progressive Congress. Dapo Abiodun was the board Chairman of the Corporate Affairs Commission. He is the managing director of Heyden Petroleum and the founder of First Power Limited. On 10 March 2019, he was declared Governor-Elect of Ogun State by the Independent National Electoral Commission.

He is married to Bamidele Abiodun and they have had five children. On October 2017 he lost his son Olugbenga Abiodun reportedly died of drug overdose.

He is the managing director/CEO of the Nigerian oil and gas company Heyden Petroleum Ltd (HPL). He is also reportedly the founder of First Power Limited 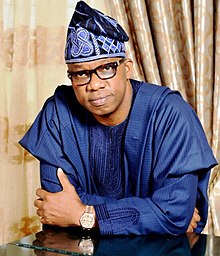 Abiodun is a founding member of Peoples Democratic Party (PDP) in Ogun State, although he is currently a member of the All Progressive Congress (APC) defecting after the 2015 general elections. He contested the Ogun East senatorial seat on the platform of the All Progressive Congress (APC) in the 2015 Nigerian general elections which he lost to the Peoples Democratic Party (PDP) candidate. He was elected a senator of the Federal Republic of Nigeria on the platform of the defunct United Nigeria Congress Party (UNCP) in 1998. He has served as a member of various presidential committees and organisations.[8]

In 2019, he contested in the gubernatorial elections in Ogun state and won, under the platform of the All Progressive Congress (APC).[9]

He is a born again Christian and worships with the Mountain of Fire and Miracle Ministry. He has testified that despite much opposition to him getting into the office of Ogun state governor God still got him there

Dapo Abiodun’s political philosophy is one based on leadership. An aggressive goal getter and an astute administrator.

Dapo Abiodun embarked on the construction and rehabilitation of a total number of 94 blocks of classrooms for public primary and junior secondary schools across the 236 wards in the state while creating a mouth-watering reward system for teachers in both private and public schools. .