Bello Muhammad Matawalle is a Nigerian politician who currently serves as the Governor of Zamfara. He contested for the governorship seat on the platform of the People’s Democratic Party but defected to the All Progressives Congress in June 2021. Matawalle was previously a member of the House of Representatives for Bakura/Maradun between 2003 and 2015. He is one of the strongest politicians in the state, having served in various capacities. Matawalle is a teacher by profession.

He was born on February 12, 1962, in  Maradun Local Government Area, Zamfara State.  Dr Matawalle is married to four wives and blessed with children. 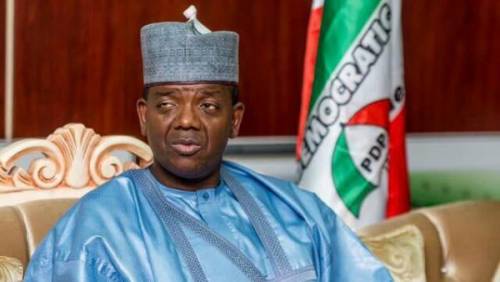 Matawalle joined politics in 1998, when he ran for a House of Assembly seat, and won under the banner of the defunct United Nigeria Congress Party (UNCP). He briefly served in this capacity until General Sani Abacha died. Following this, Abdusalami Abubakar dissolved the political parties and announced that elections would hold in 1999.  Between 1999 and 2003, Matawalle served as the Zamfara State Commissioner for Local Government and Chieftaincy Affairs; Commissioner for Environment, Rural Development; Commissioner for Youth and Sports.

Now under the defunct All Nigeria Peoples Party (ANPP), in 2003, Matawalle was elected as a member of the House of Representatives, to represent the Bakura/Maradun Federal Constituency. He was re-elected in 2007 and 2011. However, in 2011, he defected to the People’s Democratic Party. Matawalle retained his position in the House of Representatives until 2015. In 2019, Matawalle became the PDP candidate for the Zamfara gubernatorial elections. He polled 189,452 against the 534,541 votes for Muktar Idris, the All Progressives Congress candidate.

The Supreme Court however ruled against the victory of APC in the state, saying that APC did not conduct valid primaries in the buildup to the 2019 general elections in Zamfara. The Court ordered that the candidate with the second-highest votes be sworn in. Matawalle, being the first runner-up, was sworn in as the Governor of Zamfara State.

In June 2021, Matawalle, alongside most Zamfara State elected officials, defected from PDP to APC after a defection rally in Gasau, the state’s capital. He will be contesting to retain his current position as the governor of Zamfara State in the upcoming 2023 election.