Emmanuel Bwacha is a Nigerian politician who has been representing Taraba South Senatorial District in the National Assembly since 2011, on the platform of People’s Democratic Party. He was the Deputy Senate Minority Leader of the 9th National Assembly, until his defection to All Progressives Congress in February 2022. Bwacha was a House of Representatives member for the Donga/Ussa/Takum Federal Constituency between 2003 and 2007.

He was born on 15th December 1962 in Mararraba, Donga Local Government Area, Taraba State. He is married to Mrs Deborah Bwacha and they have four children. Bwacha is of Christian faith; his hobbies include reading and spreading the gospel through DVDs, Tracks, spiritual books, empowering the less privileged, promoting education for the Poor, travelling, etc 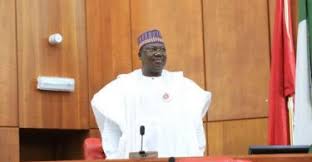 Bwacha began his political journey in 1992 when he contested for the Local Government Chairmanship of Donga LGA, on the platform of Social Democratic Party (SDP).

He was later elected the State Secretary of the then People Democratic Movement (PDM), Taraba State Chapter – a position he held between 1994 and 1997.

In 1999, Bwacha was elected into the Taraba State House of Assembly, where he represented the Donga State constituency and also served as the House Leader. During this time, in 1999, he was appointed the Commissioner of Agriculture for Taraba State. He worked in this capacity until 2003.

In 2003, Bwacha was elected into the Federal House of Representatives, to represent the Donga/Ussa/Takum Federal Constituency, on the platform of the People’s Democratic Party. Here, he served seat as the Chairman of the House Committee on Police Affairs. After his tenure in 2007, he contested in the Senate, but he lost.

Bwacha contested again in 2011, and he won, being elected the Senator representing Taraba South Senatorial District under the banner of PDP. During this tenure, he served as the Chairman of the Senate Committee on Agriculture. Bwacha was re-elected into this office in 2015 and 2019.

In 2022, the Independent Corrupt Practices and other related offences Commission (ICPC) gave a report of Bwacha’s alleged abuse of office by converting the public property to personal use in executing some multi-million-naira worth of constituency projects. One of which was a contract for the construction and renovation of blocks of classrooms at the Federal University Staff School in Wukari, to his company. According to the ICPC, Bwacha awarded the contract to Eloheem Educational Management and Schools Ltd, a firm “owned and operated directly” by him.