Hope Odidika Uzodinma is a Nigerian politician and the current governor of Imo State, on the platform of All Progressives Congress. He served as the Senator representing Imo West, between 2011 and 2019.  He is a businessman by profession.

He was born on 12th December 1958 in Omuma, Imo State, to an Igbo Catholic family. He was born to Chief Michael Uzodinma, who held the chieftaincy title of Igwe of Ozuh Omuma, and Mrs. Ezinne Rose Uzodinma (née Nneoha). Uzodinma is married to Chioma Uzodinma, and they are blessed with seven children. He is a kinsman of the Okoro family of Etiti-Omuma and holds the ceremonial title of Onwa-Netiri Oha of Omuma Kingdom, in Oru LGA, Imo State. 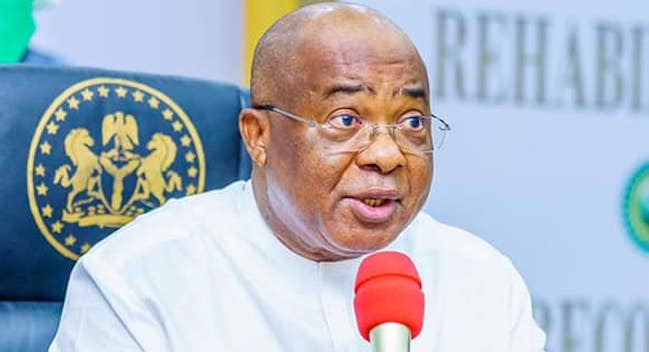 Uzodinma’s political career began during the Second Nigerian Republic. In 1983, he became the Imo State Youth Leader of the then ruling party, the National Party of Nigeria (NPN). Following the aborted transition to the Third Nigerian Republic in the 1990s, Uzodinma featured as a prominent member of the United Nigeria Congress Party.

After the return of democracy in 1999, he joined the People’s Democratic Party, where he served as a member of the party’s National Caucus, National Executive Committee and a Board of Trustees member, at various times between 1999 and 2017.

In late 2002, just ahead of the April 2003 elections, Udodinma decamped to Alliance for Democracy (AD), becoming the party’s candidate for the Imo State gubernatorial elections. Following his loss, he returned to PDP in 2004.

Again, in 2006, Uzodinma showed interest in the Imo State governorship seat, but he lost the PDP primaries, coming second to Senator Ifeanyi Araraume. He was eventually appointed as a member of the PDP Board of Trustees in 2007.

On May 29th, 2011, Uzodinma was sworn in as the Senator representing Imo West Senatorial District, on the platform of PDP. He was re-elected to this position during the 2015 elections. His legislative interests include Aviation, Marine Transport, Land transport, Appropriation and Ecology. Uzodinma served as the Vice-Chairman Senate Committee on Aviation.

He left the People’s Democratic Party and joined the All Progressives Congress in 2018, to contest for Governor of Imo State in the 2019 general elections.

In March 2019, the Independent National Electoral Commission announced the governorship election results, with Emeka Ihedioha of PDP emerging as the winner. Uzodinma made an appeal to the Supreme Court to look into the case on grounds of irregularities. After much investigation, the Supreme Court found that Uzodinma held the majority of lawful votes cast.

Thus, Uzodinma was declared the winner of the March 2019 gubernatorial elections, which nullified the election of incumbent Emeka Ihedioha. Uzodinma was sworn in as the Governor of Imo State in January 2020.