Joseph Obinna Ogba is the Senator who has been representing Ebonyi Central Senatorial District since 2015, on the platform of People’s Democratic Party.

He was born in 1961 in Nkalagu, Ishielu Local Government Area, Ebonyi State. 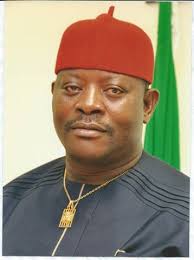 Following this, due to his experience in football, he was appointed the Commissioner for Youths and Sports, Ebonyi State in 2002. After serving in this capacity, he became the chairman of some football associations in the state and country.

On January 1st, 2022, during a press briefing, he declared his interest to run for governorship of Ebonyi State in the 2023 elections on the platform of the People’s Democratic Party.

2021 South-East Senator of the Year Award by Independent Newspaper

In 2020, the Chairman of Afikpo-South Local Government Area of Ebonyi State, Dr. Eni Uduma Chima, alleged that Ogba forged his two Ordinary Level West African Examination results of 1989 and 1990. According to the Chairman, the fake results are products of examination malpractice, impersonation and criminality, as the passport photographs on the two results are those of two different people and not that of Ogba.