Dr Kadri Obafemi Hamzat is a Nigerian politician who is the current Deputy Governor of Lagos State, on the platform of All Progressives Congress. He is an engineer by profession.

He was born on the 19th of September 1964 in Lagos State to Late Oba Mufutau Olatunji Hamzat (Olu of Afowowa Sogaade) and Late Alhaja Kehinde Hamzat who was from Iga Egbe, Lagos State. His father was a politician who served as a Lagos State Commissioner for Transportation and the Lagos West Senatorial District leader of Action Congress.  Kadri is married to Oluremi Hamzat, and they are blessed with children. 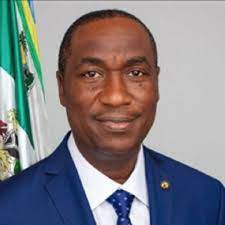 Hamzat’s political journey began in August 2005, when he was appointed by the then Governor, Bola Ahmed Tinubu, as the Commissioner for Science and Technology – a position he retained when Fashola assumed office.

In 2011, Fashola appointed Hamzat as the Lagos State Commissioner for Works and Infrastructure – a position he held until the Fashola left the governorship office in 2015. Between 2016 and 2018, Hamzat served in the Federal Ministry of Power, Works and Housing, as the Special Adviser Technical to the Honourable Minister Babatunde Fashola. During this time, he served as a consultant to Ministries, Departments and Agencies (MDAs), on public infrastructures such as Architectural designs, Structural designs, Quantity surveying, and Mechanical and Engineering devices.