Owelle Rochas Anayo Okorocha is the present Senator representing Imo West Senatorial District, on the platform of All Progressives Congress. He was the Governor of Imo State between 2011 and 2019. Okorocha is a businessman, philanthropist and administrator. He is versed in local, national, and international policies and global trends in economic development.

He was born on 22nd September 1962 in Ogboko, Ideato South, Imo State, to an Imo father and an Anambra mother. He grew up in Barkin Ladi, Plateau State. Okorocha is married to Nneoma Nkechi Okorocha, and they have six children. He is one of the richest politicians in Nigeria, with an estimated net worth of $1.4 billion. 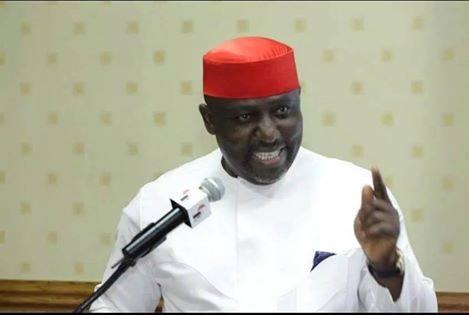 Okorocha’s political career began when he served as the Commissioner on the Federal Character Commissioner, and when he was a Member of the National Constitutional Conference.

In 1999, he competed in the primaries of the People’s Democratic Party to be the party’s candidate for the Imo State gubernatorial elections. He was unsuccessful. In 2003, he continued in his political ambition by decamping from PDP to the All Nigeria People’s Party to run for the party’s presidential nomination. Again, he was unsuccessful. He returned to PDP, and was appointed as the Special Adviser to President Olusegun Obasanjo on Inter-Party Affairs.

Okorocha contested in the PDP presidential primaries leading up to the 2007 general elections. He emerged the first runner up, losing to Late President Yar’Adua.

Okorocha later decamped from PDP to All Progressives Grand Alliance (APGA)  to run as the party’s candidate for the 2011 Imo State gubernatorial elections. Despite being suspended from the APGA on the verdict of “anti-party activities”, Okorocha went on to campaign and eventually won the governorship seat in Imo State. He was sworn in as the Governor of Imo State in May 2011, under the banner of APGA.

On March 2nd, 2013, Okorocha led a faction of APGA to form the All Progressives Congress. He was later elected as the Chairman of the Progressive Governors Forum. Okorocha was also re-elected the Governor of Imo State in 2015, under the banner of APC. Following the end of his tenure as Governor, he contested for the senatorial seat representing Imo West Senatorial District. He won and was sworn in on 13th June 2019.

He will be resigning from his position as the senator representing the Imo West Senatorial District in the upcoming 2023 election after an unsuccessful attempt at contesting for the APC presidential primaries.

In 2022, the Economic and Financial Crimes Commission (EFCC) charged Okorocha with allegations that he conspired with others, including an APC politician and five companies, to steal ₦2.9 billion from public coffers.