Chibuike Rotimi Amaechi (born 27 May 1965) is a Nigerian politician who is currently serving as the Minister of Transportation. He was elected the Governor of Rivers State in 2007, on the platform of the People’s Democratic Party. He later defected to All Progressives Congress during his second term as Governor of Rivers state.

He was born on 27th May 1965, in Ubima, Ikwerre Local Government Area, Rivers State, to the family of the late Elder Fidelis Amaechi and Mary Amaechi. He grew up in Diobu, a densely populated area of Port Harcourt. Amaechi is married to Judith Amaechi and they have three sons. He is a Catholic and a Knight of the order of Saint John (KSJ). He and his wife, Judith, released a debut single titled ‘Blessed The People The Lord Has Chosen As His Heritage’ in commemoration of his 56th birthday. 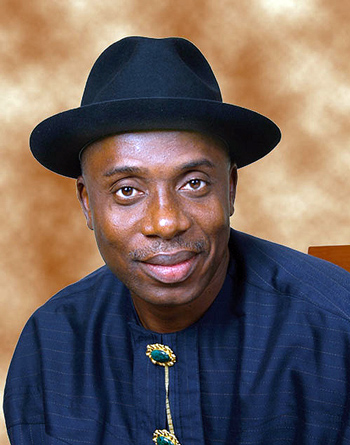 Amaechi’s political journey began during the transition to the Third Nigerian Republic, where he served as the Secretary to the now-defunct National Republican Convention, in Ikwerre Local Government Area of Rivers State.

In 1992, Amaechi was made the Special Assistant to the then Deputy Governor of Rivers State, Peter Odili. He served in this capacity until 1994.

During the transition programme of General Sani Abacha in 1996, Amaechi was the Rivers State’s Secretary of the Democratic Party of Nigeria (DPN) Caretaker Committee.

In 1999, he was elected a state legislator under the platform of the Peoples Democratic Party (PDP), to represent Ikwerre Constituency in the Rivers State House of Assembly. Upon his election, he was also made the Speaker of the House of Assembly – a position he held until 2007. During this time, Amaechi was elected the Chairman of Nigeria’s Conference of Speakers of State Assemblies.

Amaechi’s relationship with Peter Odili was a smooth one, until Amaechi launched a campaign against the Rivers State government, and verbally attacked the image of the State Governor (Odili), in an attempt to succeed him in 2007.

In 2007, Amaechi contested for the governorship seat of Rivers State, and he won it on the platform of  the People’s Democratic Party. Amaechi was sworn in as the Governor of Rivers State in October 2007. He was re-elected for a second term in 2011.

In 2011, Amaechi succeeded Dr Abubakar Bukola Saraki, as Chairman of the Nigeria Governors’ Forum, and was re-elected to this position in 2013.

Amaechi was amongst seven serving governors who formed the G-7 faction within the PDP, in 2013. A disagreement within the party led to five members of the G-7, including Amaechi, defecting to All Progressives Congress. Subsequently, Amaechi became the Director-General of Muhammadu Buhari’s 2015 presidential campaign.

Following Buhari’s victory in the  2015 general elections, Amaechi was appointed the Minister of Transportation by the President. He has held this position since then.

On April 9th, 2022, Amaechi declared his interest to contest in the Presidential election in 2023, on the platform of the All Progressives Congress.