Sahabi Alhaji Yaú is a Nigerian politician who has been in the National Assembly since 2007, as a Senator representing Zamfara North Senatorial District. He is a member of the All Progressives Congress.

Yaú has a Masters’s In Business Administration and a Postgraduate Diploma In Management. 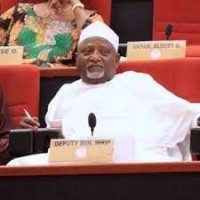 In 2007, Yaú was elected into the Senate to represent Zamfara North Senatorial District, on the platform of the All Nigeria Peoples Party (ANPP). During this time, he was appointed to Committees on Downstream Petroleum, Inter-Parliamentary Affairs, Public Accounts and States & Local Government.

In 2011, Yaú ran for re-election into the Senate, on the platform of the People’s Democratic Party. He emerged the winner, and he has retained this position since then.

Yaú was the Deputy Senate Minority Whip of the 9th Assembly until his defection to APC. In June 2021, Yaú, alongside Governor Matawalle and most Zamfara State elected officials, defected from PDP to APC after a defection rally in Gasau, the state’s capital.

He will be contesting to retain his current position as the senator of the Zamfara North senatorial district in the upcoming 2023 election.