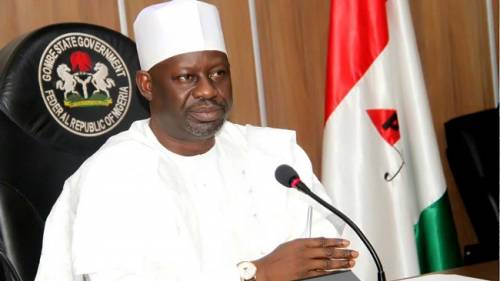 Ahead of 2019 general elections, about 2000 supporters of People Democratic Party in Gombe State have defected to the All Progressives Congress APC in the State including by the younger brother of Governor Ibrahim Dankwambo

Buhari Dankwambo came after the failed efforts of his brother and some political bigwigs to convince to remain in remain in the PDP.

Our correspondent learned that Buhari Dankwambo, until his defection, had been under pressure from different quarters to reverse his decision. It was gathered that he was given juicy offers but he rejected them.

A source closed to the government said the efforts to stop Dankwambo from moving to APC was not because of his political relevance but because it will be embarrassing for the blood brother of a sitting governor who is aspiring to be the president of Nigeria to decamped to an opposition party.

“Obviously something is wrong; it shows that the governor is not capable of managing situations around him,” the source said.

“We felt we could manage the situation but unfortunately it was above our ability,” the source said, refusing to tell our correspondent details of what transpired, simply said.

“The governor takes the highest proportion of the blame in the whole act.”

Our correspondent gathered that Dankwambo was formally presented with his membership card by the chairman of his Ajiya ward in Gombe North constituency after he registered.

Our correspondent further learnt that his supporters will also join him in APC when he is formally presented to the state leadership of the party at a grand reception in Gombe, the state capital.

In a telephone interview with newsmen Buhari Dankwambo, said that he decided to join APC because the PDP was not fair to him.

“Some people in the PDP have decided not to be fair to me,” he said.

“Since PDP cannot accommodate me I decided to move to the APC to pursue my political ambition.”