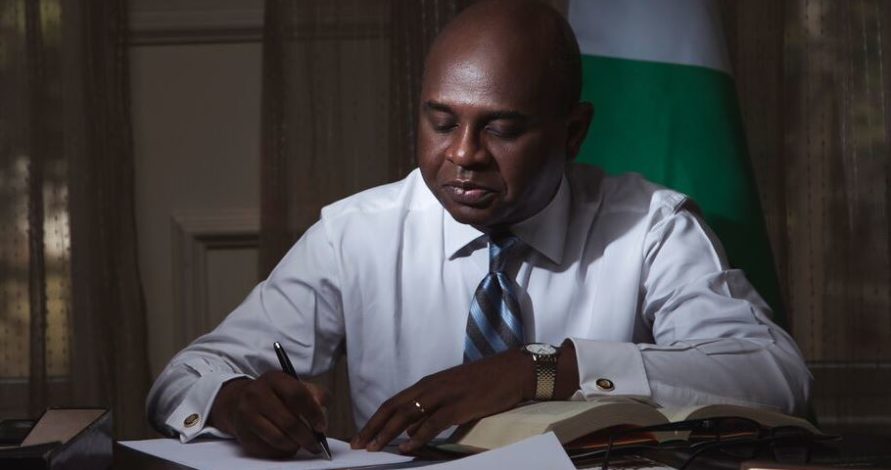 Prof. Kingsley Moghalu, former Deputy Governor of the Central Bank of Nigeria, has emerged the presidential candidate of the Young Progressive Party (YPP).

Moghalu, who was a former UN officer, emerged through delegates election at the party’s first National Convention and Presidential Primaries on Saturday in Abuja.

Moghalu scored 243 votes out of 253 accredited delegates, after his only opponent, Mr Donald Igwegbu, steped down for him.

Igwegbu, announcing his decision to step down, said he took the decision not because he was not qualified to contest in 2019 but because Moghalu shared the same vision with him

Igwegbu called on party members and his supporters to support Moghalu, while urging other politicians to emulate his spirit of sportsmanship.

He said: “Let us embrace spirit of love and patriotism.”

In his acceptance speech, Mogbalu said Nigeria needed a leader of international repute, not politicians that had failed the country.

“More than ever before, Nigeria needs to be driven by a vision, informed by a worldview that determines everything else.

“Up till about 40 years ago, China was viewed as a basket case; overpopulated, unproductive and ruined economically by policies of the decades prior to that.

“Today, they snap their fingers and nearly every single African Head of state shows up in China with their hands out, eager for Chinese largesse. That’s what a country driven by a worldview can achieve.

“In accepting the presidential ticket of this great party, I stand here before you to say that Nigeria is fully capable of achieving greatness at home and abroad in our lifetimes.

“But this cannot happen with the normal way of doing things, the so-called Nigerian way.”

Moghalu said that he joined the YPP because he believed the party would live up to its name of being progressive, as well as be an agent of raising standards across the board for politics and policy.

He said that it was time for the country to close the era of waste, corruption, and incompetence that held Nigeria back from achieving its potential.

“It is a choice between remaining a mere fractious assortment of ethnicities and religious on one hand and building a real nation on the other.

“It is a choice between freedom and slavery under our recycled and corrupt politicians; between poverty and prosperity for our masses of the poor, and the unemployed, and between stability and continuing instability of the Nigeria state.”

Earlier, YPP National Chairman, Bishop Amakiri said that Nigeria did not suffer from want of resources both natural and human.

“As a party, our policy thrust shall revolve around developing the rich human capital that is in abundance in Nigeria.

“In pursuit of a knowledge economy, education shall be the hub of our development quest since no nation can grow beyond the quality of her education.”

He said on the debate of restructuring, the position of the YPP was crystal clear that the present structure was not sustainable.

“The key to running a globally competitive economy rests entirely on restructuring our present socioeconomic and political system to empower component units to operate maximally.

“Our party will take a bold step of an all-inclusive engagement with critical stakeholders to immediately see how the exclusive list can be decongested to relinquish more responsibilities to the States.”

He said that the party was ready to take over the country’s leadership.(NAN)