Nigeria’s Davido Gets On The Political Campaign Trail 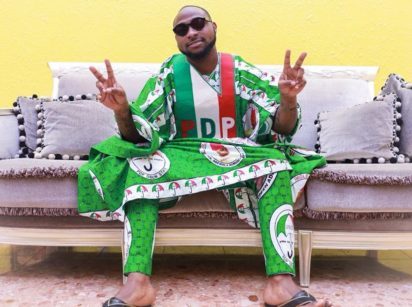 He’s the Nigerian star of Afropop, feted across Africa and the globe as a multi-millionaire singer-songwriter and record producer. But Davido — real name David Adedeji Adeleke — has recently been more focused on party politics and getting his uncle elected as governor of his home state of Osun this weekend.

Ademola Adeleke, dubbed “the dancing senator” because of his penchant for dancing in public, must be hoping his high-profile nephew can win him as many voters as he has music fans. The 58-year-old politician is running for the main opposition Peoples Democratic Party (PDP) against Gboyega Oyetola of the ruling All Progressives Congress (APC). Candidates from no fewer than 48 parties are vying to replace APC Governor Rauf Aregbesola, who is stepping down after a maximum of two four-year terms. Saturday’s poll is the final major electoral test before Nigerians vote for a new president, parliament, governors and state legislatures in February and March next year. Davido’s intervention is undoubtedly the highlight of a state election that is being seen as test of President Muhammadu Buhari’s popularity in Nigeria‘s southwest. The region, which includes Lagos, the country’s megacity of 20 million people, is a key electoral prize for any presidential hopeful and major political parties. – Political dynasty – Davido, who has become a common sight on the campaign trail, last weekend took star billing at a rally in his hometown of Ede, performing some of his most popular tunes. The 25-year-old artist is currently carrying out his yearlong compulsory national service — a far cry from the glitz and glamour of his private jet and a recent Africa tour. He was pictured singing and dancing for fans on top of PDP vehicles in a field, delighting local party members and a throng of supporters. Billboards in the state also show pictures of the singer in traditional dress, leaning on an empty black leather chair next to the Nigerian flag. “I, Davido, support Senator Nurudeen Ademola Adeleke as governor of Osun State,” the roadside advertisements read. While he may be better known as one of Nigeria‘s most successful musical exports, Davido also comes from a well-known political dynasty. His grandfather, Raji Ayoola Adeleke,was a senator between 1979 and 1983 while another uncle, Isiaka Adeleke, was Osun’s first civilian governor from January 1992 to November 1993. The performer’s father, Adedeji Adeleke, is a wealthy businessman with interests in banking, property, education, shipping, haulage and oil and gas. – Enhanced security – Regardless of whether Davido swings it for the PDP, Nigeria‘s authorities are taking no chances over security to ensure Saturday’s vote goes smoothly. The last gubernatorial vote in the southwestern state of Ekiti in July led to widespread concerns about vote-buying by leading political parties. The Nigeria Civil Society Situation Room coalition of civic groups said its monitors “observed widespread financial inducement and vote-buying in and around several of the polling units”. The “brazenness” of the practice could undermine democracy, it added. The candidate of Buhari’s APC won the poll. Fear of political violence, which is never far from the surface in Nigeria, has also seen security reinforcements sent into Osun state. Police said 40,000 officers, two helicopters, 30 armoured personnel carriers, 300 patrol vehicles and sniffer dogs have been deployed to ensure the poll is peaceful. Buhari, who is seeking a second term, has promised February’s election will be free, fair and safe.